The Forth & Clyde Canal

Canal holidays Scotland. These two canals provide a superb navigation from coast to coast across the very centre of Scotland. They link the two historic and visitor friendly cities of Glasgow and Edinburgh and at their junction provide what is undoubtedly the greatest wonder of the waterways in the entire world, The Falkirk Wheel.

Two great cities, plus the Falkirk Wheel, Linlithgow Castle, Almond aqueduct, and the list of attractions alongside these two canals is absolutely unique. 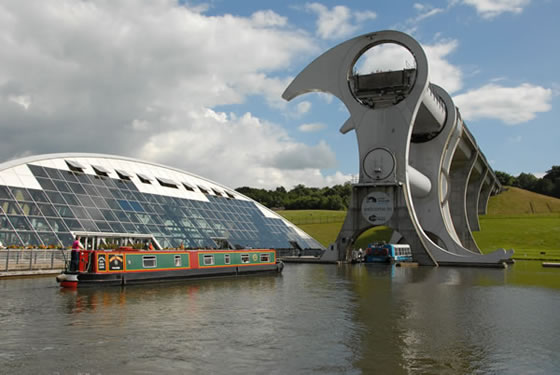 he Union Canal, or to give it it’s full name, the Edinburgh and Glasgow Union Canal, was begun in 1818 and opened 4 years later. The principal engineer on the project was Hugh Baird, although he took advice from the great engineer Thomas Telford.

The canal was originally constructed to transport coal into Edinburgh, breaking the monopoly of the Edinburgh coalmasters and Midlothian mine owners. A 50 km (31.5 mile) contour canal, it ran from Edinburgh to Falkirk where it joined the Forth & Clyde Canal at Lock 16.

Popular features of the canal include the Avon, Almond and Slateford Aqueducts, which are amongst the finest in Britain, and the Laughin’ and Greetin’ Bridge at Glen Village, famous for its carved faces on the keystones.

The Union boasts the only canal tunnel in Scotland, cut through solid rock. It was constructed because a powerful landowner objected to the prospect of being able to see the canal from his house.

The canal is famous for the discovery of the Solitary Wave of Motion by John Scott Russell in 1834. The new aqueduct over the A720 Edinburgh City bypass was named after him.

On a more sinister note the famous body snatchers, Burke and Hare, were employed to cut the canal in the Edinburgh area.

The Glasgow to Edinburgh railway, which opened in 1842, caused the rapid decline of the Union Canal. In 1861 the canal was taken over by the North British Railway Company, and in 1921 Port Hamilton and Port Hopetoun were sold to Edinburgh Council and filled in.

The Forth & Clyde Canal

The Forth & Clyde Canal is 56km (35 miles) long, from Grangemouth on the Firth of the Forth to Bowling on the Firth of Clyde. Following completion of Millennium Link restoration work, the canal opened in the Spring of 2001, providing coast to coast navigation. The link with the Union Canal, allowing navigation from the centre of Glasgow to the centre of Edinburgh, has been achieved with opening of the Falkirk Wheel on 24 May 2002 by Her Majesty Queen Elizabeth II.

Experience the incredible new Falkirk wheel, opened in 2002, linking the Forth & Clyde Canal to the Union Canal. You can explore the lowlands of Scotland from Glasgow in the West, to Edinburgh in the East, with easy cruising and very few locks on these wonderful, recently restored canals.

The magnificent Almond Aqueduct takes you to Linlithgow. From the canal basin there are panoramic views over the town, its palace, Loch and the hills beyond.

The Union Canal passes high above the town of Falkirk as you approach the junction with the Forth & Clyde Canal.
The breathtaking Falkirk Wheel takes you down to join the F & C Canal, whilst a stop over at Falkirk allows you to take in a host of other attractions.

Scotland’s Roman heritage in the form of the Antonine Wall is never far away as the canal carries you through splendid scenery to Kirkintilloch, then on to Cadder village and into Glasgow.

Get all of the latest news and offers by signing up to our newsletter using the form opposite.